Owen Gaffney and Grant Pierce were pre-schoolers when they met in Los Angeles. They were in fifth grade when Pierce pushed Gaffney to try lacrosse, at a program that Pierce’s father, Clark, started.

Half a decade later, the two players have blazed unique paths through the world of lacrosse. Gaffney, a two-way midfielder with a tireless motor, has starred at Loyola High School, part of a burgeoning lacrosse scene on the West Coast, on the way to Harvard. Pierce, whose family moved to the Philadelphia suburbs before he entered eighth grade, is a Fairfield signee after being the cornerstone of Radnor’s defense on the way to a state title in Pennsylvania.

And for their last games before going off to college, the duo played as teammates one more time, on the American team at the National Senior All-Star Game Saturday night. 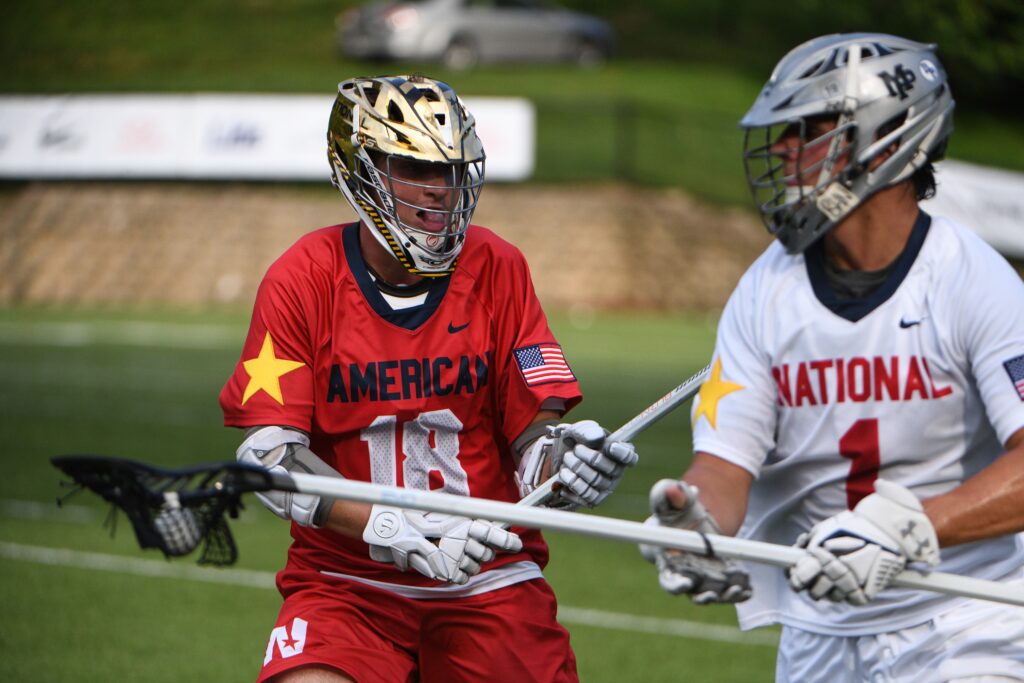 With Gaffney and Pierce both picking up points, the American squad won the inaugural contest, 17-15, over the National squad at Boys’ Latin School in Baltimore, in a game showcasing 44 of the best players in the high school class of 2021.

For Gaffney, who scored twice, being on the same team as Pierce was a poignant culmination. It came a week after they were able to hang out in Los Angeles, Pierce traveling back West to reconnect with friends.

“It’s super awesome for it to come full circle,” Gaffney said. “Who would’ve ever thought that would happen starting out in West L.A. and him moving and never knowing if we were going to cross paths again? So it’s super cool, it’s super unique and I’m so happy that we’re able to do this.”

Gaffney scored the goal that put the Americans ahead for good in the third quarter, breaking a 6-6 tie five minutes into the second half. He also scored in the first quarter. Pierce, who provided outstanding defense, assisted on one of six goals by Griffin Schutz (Deerfield Academy/3D New England/Virginia) with a pass in transition.

Pierce was one of three poles to hit the score sheet for the Americans. LSM Michael Bath (Gonzaga/Madlax/Princeton) scored twice in the fourth quarter. Bobby Van Buren (Ohio State/Team 24/7 Charlotte) added a goal in the fourth, weaving through several defenders to get the cage. 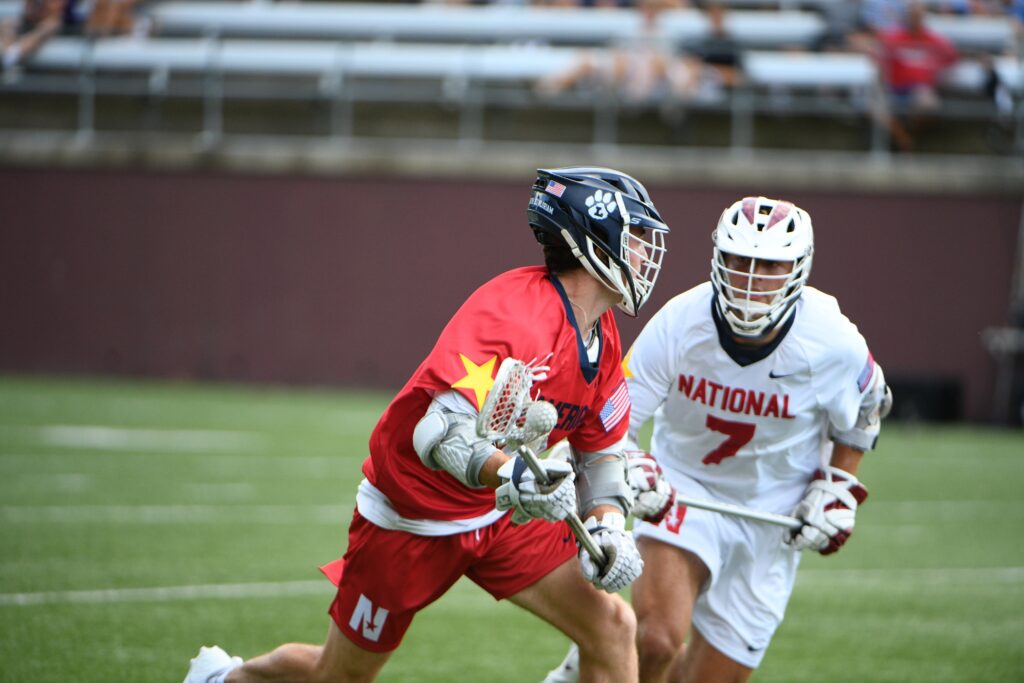 One of the prime facilitators for the Americans side was Thomas Mencke (Highland Park/MadDog National/Virginia). The Dallas native scored a goal and added two assists, showing his ability to complement an attack line with Schutz as the consummate finisher on the crease and Dewey Egan, who added two goals.

“I just play off them, play my role and see what I can do to help them out,” Mencke said. “I think for me, it’s a little easier than it usually is.”

Offense reigned in the game, despite the best efforts of Nationals goalie Jack Fracyon (Bullis/DC Express/Penn State). Fracyon was in net the whole way, making 22 saves. He was vital in helping the Nationals, who trailed by four in the third quarter, get back in the game. 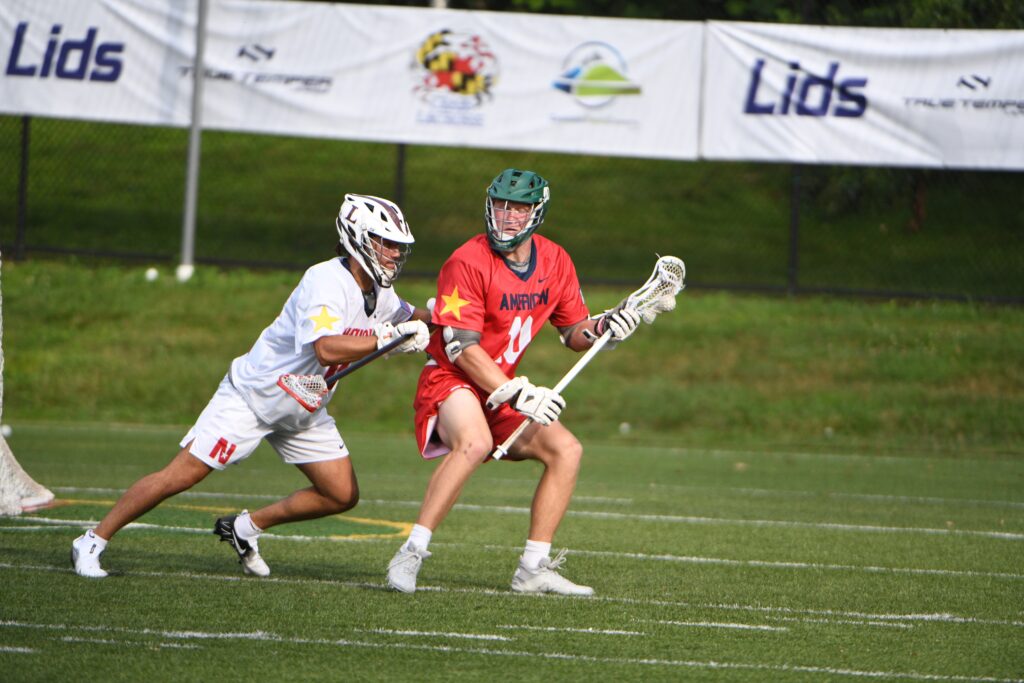 “I probably faced upwards of 70 shots today, but it’s a great experience,” Fracyon said. “I’m really glad I got to see all that. … It changes your mind when you’re in there. You make a save, it’s fun. You get scored upon, and you wish you weren’t. But you just go with it.”

The Nationals led 4-2 after one quarter, with captain Leo Johnson (Avon Old Farms/Eclipse/Yale) scoring twice. They led 6-3 before Schutz scored twice in a seven-goal run by the Americans to make it 10-6.

But the Nationals battled back within 10-9 on Trey Digby’s goal with 3:30 left in the third, a third goal in 58 seconds when the Valor Christian/Denver Elite/University of Denver LSM scooped a GB and drove to the hole. The rally started with a goal from middie Joseph Taraboletti (Ponte Vedra/Sweetlax/Denver).

Though the National Senior All-Star Game was a new event, for Gaffney and Pierce, it brought them back to their first days on the lacrosse field.

“It was great. It was just like old times,” Gaffney said. “It was so great to share the field with him again. The chemistry, even when we were running fastbreaks, it felt like it was the past again. It was awesome.”

Had there been an MVP award, it easily would’ve gone to Schutz. He scored six times, getting his big body into dangerous areas. At 6-3, 220 pounds, he’s got a college-ready build. His instincts to get into dangerous areas around the crease and find soft spots in transition is already elite, and he’s got the hands and shooting ability to cash in when he finds himself in those areas.

Though they were on the wrong end of the decision, the chemistry in the attack of the Nationals team was excellent. It makes sense, given the history of Ricciardelli and Leo Johnson playing together for Eclipse (with Chris Canet) and the Taft connection with future ND teammate Chris Kavanagh. Ricciardelli had the edge in goals, with four tallies to three each for Johnson and Aidan Mulholland. Ricciardelli isn’t the biggest attackman, but that matters little when he gets his feet moving, his hands cycling and his punishing shot off.

Lynch led the way with three assists, and while he’s got no shortage of talent at his previous teams, you can see the way he elevates his game when surrounded by elite players. His passing vision is outstanding, and he plays the kind of deferential game that, when surrounded by finishers at a place like Notre Dame (say, Ricciardelli and Kavanagh, among the sextet of future Fightin’ Irish in the game), can be out of this world. 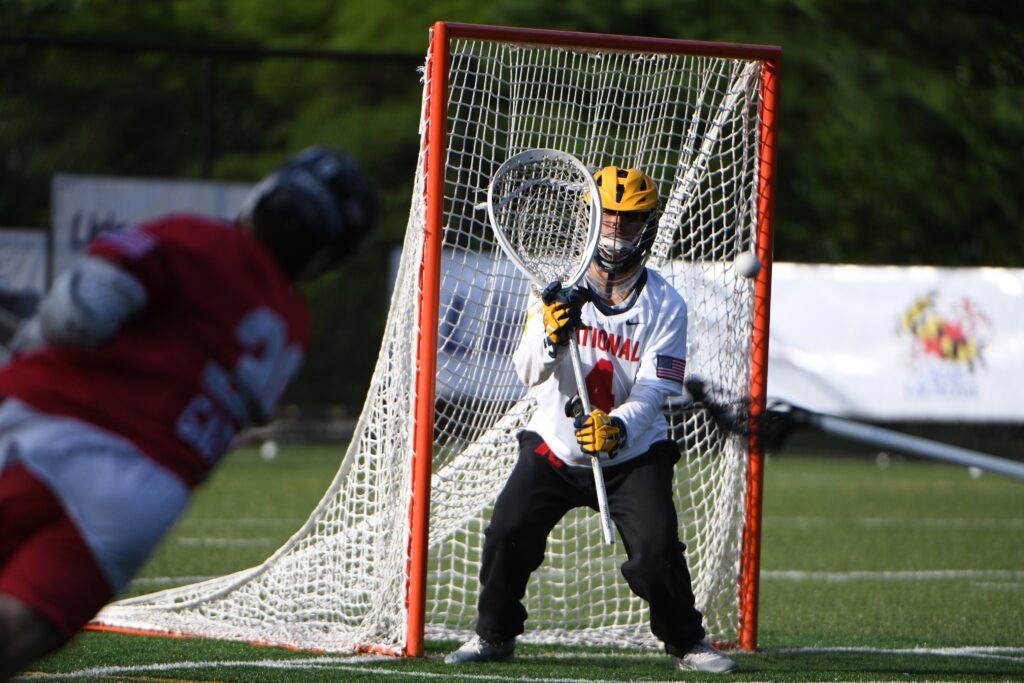 It’s not often that you can feel good about a goalie who gave up 17 goals. But if Fraycon was merely a great shot-stopper, it would’ve been closer to 30. He was excellent, with a handful of absolute show-stopping saves. He’s great on high shots, moves his feet well to cover corners low, has a high level of athleticism and takes care on all the little details (communication, covering shots, intercepting passes, working on the ground, clearing) that sets him up to be the complete package.

It’s hard to differentiate the defense/LSMs on the Americans, since Michael Bath scored twice and Grant Pierce (normally a close defender but probably an LSM at the next level) added an assist. But Van Buren shone on both sides. He got a goal in transition, showing his outstanding open-field speed. But he’s also a tremendously disciplined and heady defender who can shut opponents down.

Chenoy tired as the game went on, as the Nationals’ only faceoff man. And having to deal with 36 draws it a massive workload for anyone. But early on, Chenoy was running things at the X. He helped balance the game early, even as the Americans threatened to run and hide. He involved his wingers well, often won forward and doesn’t make mistakes when he has the ball and hands it off to his offense. Richmond is getting a steal.