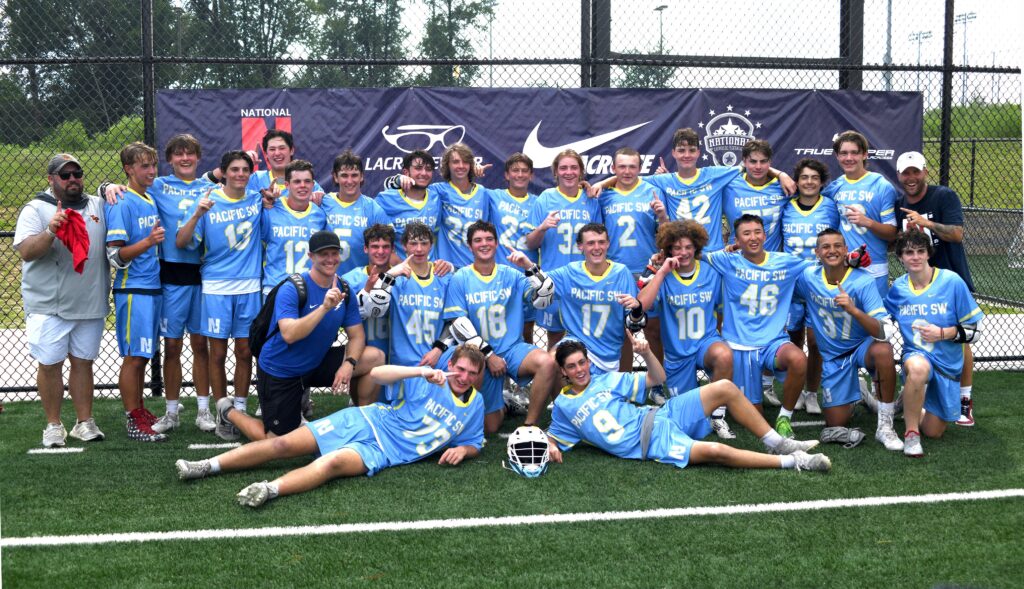 Success in an all-star lacrosse event means leaving ego aside and learning to play alongside unfamiliar teammates for a common cause. Establishing that mindset propelled this year’s Pacific Southwest team, champions of the 2024 bracket at the National All-Star Games. 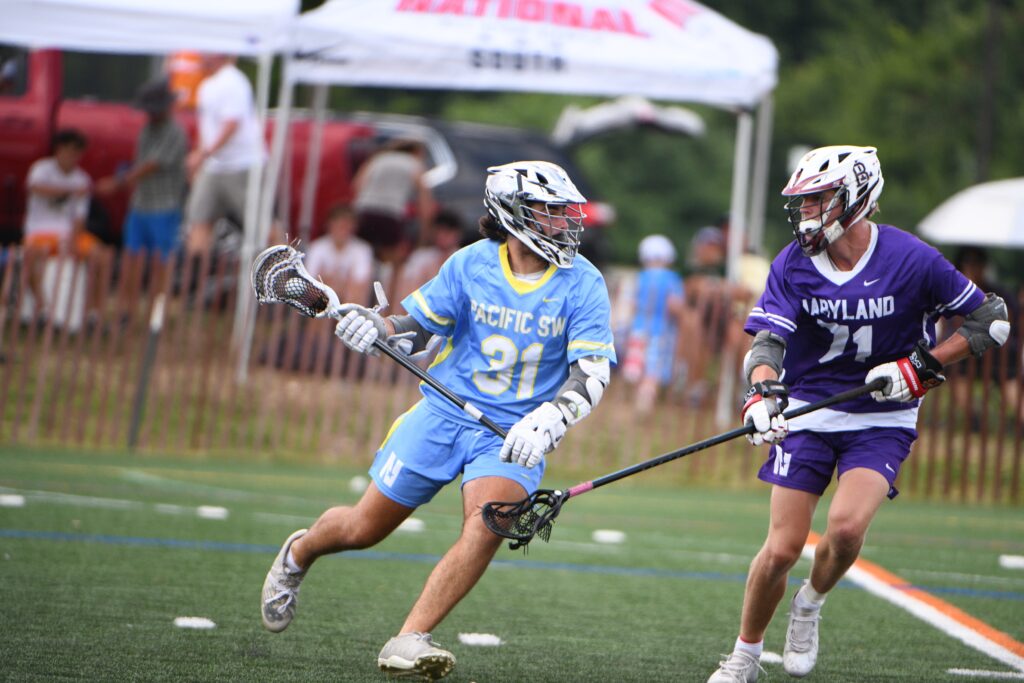 Cobbled together from players from several premier Western clubs, including Mad Dog Lacrosse and West Coast Starz, PSW capped an undefeated bracket run with a 7-6 overtime victory over Maryland 2024 in Sunday’s title game.

“We really blended together well, we were all super nice to each other,” said attackman Austin Hicks (Trabuco Hills H.S.), who earned MVP honors. “We became a team this weekend, it was an amazing experience.”

Just seconds into overtime, PSW longstick midfielder Kaiden Suh (Palos Verdes) won a groundball off the faceoff, pushed in transition and ripped an open shot on the run to score the game-winning goal.

“My coach, he said this is a groundball you’re going to get, this should be the one and got the groundball,” Suh said. “I missed [picking it up] the first time, but then I picked up and I saw an opening and I took it and shot it.”

Suh’s goal, built off the strong wing play and faceoff relationship the squad quickly established, proved to be another example of the West Coasters working as a team.

“He’s been taking shots all weekend and decided to make the game-winner in the championship,” Hicks said of Suh. “It was an amazing thing, Kaiden is a great player, great kid all around.”

Sunday’s title bout was a battle of attrition for both squads, trying to find the final push after tough bracket play through the weekend.

PSW jumped out to an early 2-0 lead on goals from attackman Sam Lovell (Taft School, Conn.), who scored in transition by attacking the right alley, and Hicks, who scored off an assist from GOGO Sean Magtoto (Cathedral Catholic).

Maryland responded, tying the game on goals from Justin Brown (St. Paul’s), who shook the defense from the right side and scored, and Cody Collier (Calvert Hall), who flipped in a shot on the doorstep on an assist from Luke Miller (McDonogh School).

PSW took a three-goal lead into halftime after a strong second-quarter run. Lovell scored his second goal driving from X topside to make it 3-2, then Hicks fed streaking midfielder Axel Greve (Palisades Charter) to make it 4-2. Beau Hokanson (La Costa Canyon) capped the run by driving through the middle.

“It was really just moving the ball and playing as an offense,” Hicks said about his team’s ability to respond on offense. “We really learned how to play with each other this weekend. It was amazing. I haven’t seen a group of boys come together so well. It was unbelievable.” 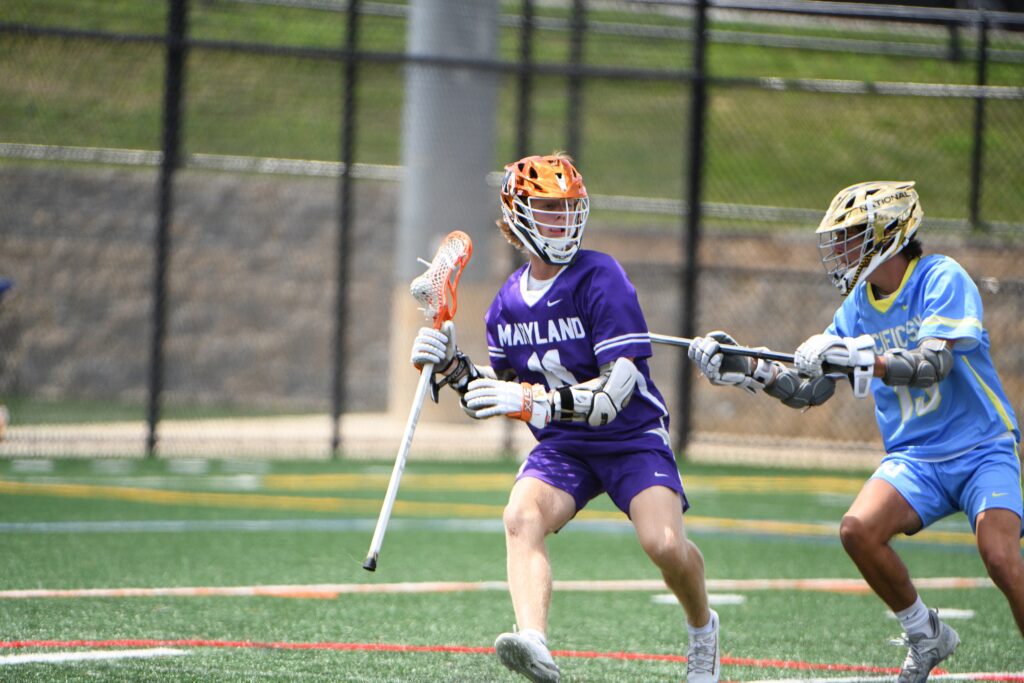 The teams traded goals in the fourth quarter to reach OT. PSW Midfielder Ryland Roach (Torrey Pines) scored on a skip pass from Hicks to take a one-goal lead, but Ben Firlie (McDonogh) tied it up on a pass from Brown.

Both teams finished perfect in their respective brackets leading up to Sunday’s title game. PSW beat Long Island 8-5 in the semifinals, while Maryland topped DMV, 5-4, on a last second goal from Beard.

The 2024 tournament MVP Hicks was buttery smooth as the team’s right-handed sniper. He’s a smart player who positions himself well on the right-hand side to serve as an outlet for transition. He also operated well in the two-man game, using picks to create shooting opportunities. Hicks’ low-to-high rip is deadly when it’s hitting the net.

A Texan, Lovell is the smart X attackman you want running your offense. Working from behind the net, he showcased both the ability to drive to and score, head to GLE and hit the cutter for goals or work topside and shoot in the alleys.

Greve was a grinder in midfield. He made smart cuts, used a stutter step and worked hard on the ride. Greve found extra possessions off groundballs when they were otherwise hard to come by for PSW.

Another smooth player who cut his way confidently through defenses, he was smart in attacking open lanes without forcing contact, and unleashed with quick hands when he had an open shot.

One of those smart LSMs who makes his presence felt in the middle of the field, whether it was on groundballs, helping on the ride or forcing turnovers. He had one bad penalty but overall his skillset stood out.

Wynn plays with a big, athletic style in net, using his full reach including his legs to make saves. He also appeared comfortable moving outside the net, helping on the clear and on the defensive ride.

Miller was an offensive engine for Maryland, with the ball usually going through his stick on the offense. He was often the facilitator for the ‘hockey assist’ on several goals. His best work came working from X to right GLE.

All-star events are a hard place to evaluate close defensemen, but Arrup’s technique stood out. He posted up on opponents’ top shooters, showcased excellent feet, good instincts in group movement and a big stick that could lay the hurt.

Dua wasn’t a huge point scorer, but he didn’t have to be to stand out. He did his work in the middle of the field, with the athleticism of a footblal player on clears, the ride, wing play and on the ground. Grind points and athleticism matter on the recruiting trail, and Dua was the best in that regard.

Beard was a wonderful two-way presence in Maryland’s midfield. His athleticism stood out on groundballs and in the rides and clears. He also showcased offensive intelligence, knowing when to cut through the middle, attack the alley or look for the pass off a dodge.

One of those players who always ended up with the ball in his stick on offense. He worked a strong two-man game with teammate Ben Morris (Bayport Blue Point), quarterbacked from X and drove to the cage with confidence.

Good left-handed goalies have a way of standing out in tournaments like this. They have a natural defensive position working against rightie shooters, plus Smith also floated around the cage to the ball naturally and held his line on the edges.

Duenkel falls into that category of skilled attackmen who are among the first players to impress at a tournament like this. He showed smarts on both GLE and topside and let the ball rip in exploiting defensive breakdowns.

Needed to highlight this massive 6-foot-4 midfield prospect. He scored two goals sweeping across the middle of an opposing defense, using his height for leverage and length to put mustard on his shots.