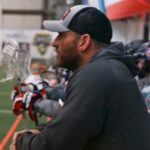 Anthony is from Cleveland, Ohio where he grew up in North Olmsted and later attended St. Ignatius High School. He was his team MVP his Senior year in both Ice Hockey and Lacrosse, and he was also a 1st Team All Midwest as well as an All State Award Winner on the lacrosse field. Anthony has an Education degree from The Ohio State University. When he is not coaching, he enjoys playing ice hockey and rugby, as well as hunting.