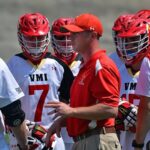 A 2006 graduate of the United States Naval Academy, Birsner led Navy to three top 10 finishes and played in the NCAA National Championship Game in 2004. Jon lettered four years in lacrosse, was a two-time All American, and was voted captain by his peers as a senior. Birsner ranks 8th on Navy’s all-time points list (154), is fourth all-time in assists (105), and was named Patriot League Offensive Player of the Year his senior season.

After graduating from the Naval Academy, Jon spent seven years (2006-2013) as a surface warfare officer in the United States Navy, serving in numerous leadership positions. Birsner served on the USS Denver, a ship in the US Readiness for Amphibious Warfare group; as Electronics Warfare Officer for US Military forces in Iraq; and as an instructor at The Naval Officer’s Candidate School in Newport, RI. His personal awards include the Bronze Star, Navy and Marine Corps Commendation Medal, Navy Achievement Medal (two awards), and Iraqi Campaign Medal as well as being a Fleet Marine Force Qualified Officer.

Birsner started his coaching career at the Naval Academy Prep School in 2010. After serving as an assistant coach for one year, he spent the next three seasons as the head coach. During that time, he compiled a 31-9 overall record, including a program-best 15-3 season in 2013, culminating that season with a National Prep Championship victory over The Hill Academy.

Coach Birsner entered the collegiate ranks as an assistant coach at Furman in 2014 and has spent the past five years as the head coach at Virginia Military Institute. Birsner has coached, developed, and mentored 14 Division I All-Conference players, one All-American, and one Patriot League Rookie of the Year. Off the field, Birsner has been able to lead over 60 student-athletes who were recognized for their academic achievements by the Southern Conference, including the 2019 SoCon Post Graduate Scholarship Winner (John O’Donnell).